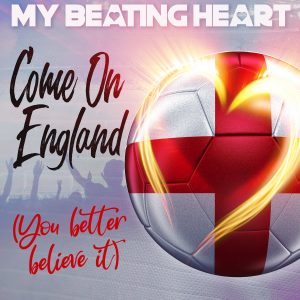 My Beating Heart: Come On England (You Better Believe It)

It’s nearly that time again when the country holds it breath and believes that, maybe, just maybe, for the first time since 1966 the English National Team can bring home the World Cup. With the tournament beginning in Qatar in less than 2 weeks something had been missing, until now. A proper World Cup anthem.

Come On England (You Better Believe it), raising awareness for Child Bereavement UK came to Nigel Carr in a dream. He ran downstairs and finished the song on his trusty Yamaha. The song caught the attention of Pop and Rock producer Mike Bennett, whose credits include Toyah Willcox, Ian Brown, The Specials, and Fat White Family.

Speaking of the track Nigel explains, “The song is a lament from a football fan, full of hope and roaring ambition, while recognising the long wait every fan has endured over the years. Come On England (You Better Believe It) recognises the incredible inspiration provided by the England Women’s football team, where, after ‘the Lions’ line, they are referred to as ‘The Esses’. The powerful chorus is both uplifting and inspirational. ‘Nothing Can Stop Us Now, You Better Believe It  – Come On England, a proper terrace chant!

The video for the track is out now and the Pre-Save for all Download sites is: https://orcd.co/comeonengland

As Nigel says, the track pays tribute to the success at the Women’s Euro’s during the summer and quite fittingly has one of the Manchester’s own lionesses leads rousing track. way. “Melanie (Williams) is a genius, not just a singer, but a vocal acrobat and artist” says Mike Bennett. “As soon as she heard the song, she not only got behind the microphone to add her magic but had the vision to pick up on Nigel’s vision of a school choir (School’s Out, Another Brick in The Wall) and arranged for Chorlton High School Choir to sing on the track. She has absolutely made the record as far as I’m concerned, not just because of her own brilliant talent but her tenacity and passion”.

The song It is underpinned by some highly notable musicians from the Manchester music scene and beyond, including members of The Smiths, Suede/Roger Waters band, The Fall, The Membranes and The Blockheads along with the aforementioned Hacienda Classical’s Melanie Williams and Chorlton High School Choir who are simply amazing. Jarelle Clayton-McKenzie provides the almost gospel riff at the end and Pet Shop Boys Musical Director played a blinder with the final mix!”

My Beating Heart: Come On England (You Better Believe it) is definitely a sum of its parts. Let’s hope the team in Qatar can pull together and pull all together something as magical.

All words by Iain Key. See his author profile here or see him on Twitter as @iainkey