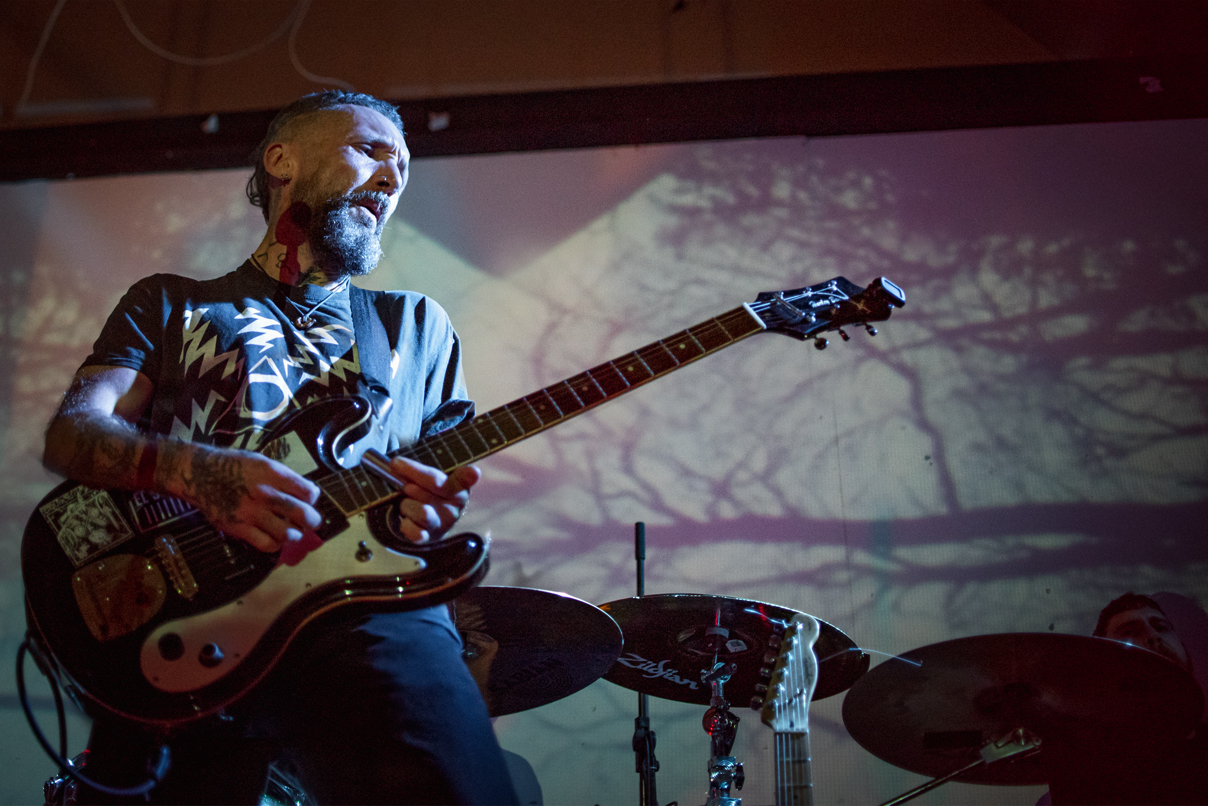 The fifth night at The Endless Hum promises all manner of noise-rock, electronica and sonic experimentation. Andy Brown shares his thoughts for Louder Than War.

Since starting up in May this year, The Endless Hum has brought a steady stream of noisy experimentation and eclectic exploration to Shipley in West Yorkshire. It’s a showcase for the very finest in underground music curated by a collective of incredibly well-informed promotors, artists and musicians. Acts have included everyone from jazzy noise collective Sly & The Family Drone and outsider hip-hop artist Algernon Cornelius to techno experimentalist AJA. It’s been one hell of a ride but all good things must come to an end. Tonight will be the fifth and final show (at least for the time being). Rest assured; they’re going out with a bang. 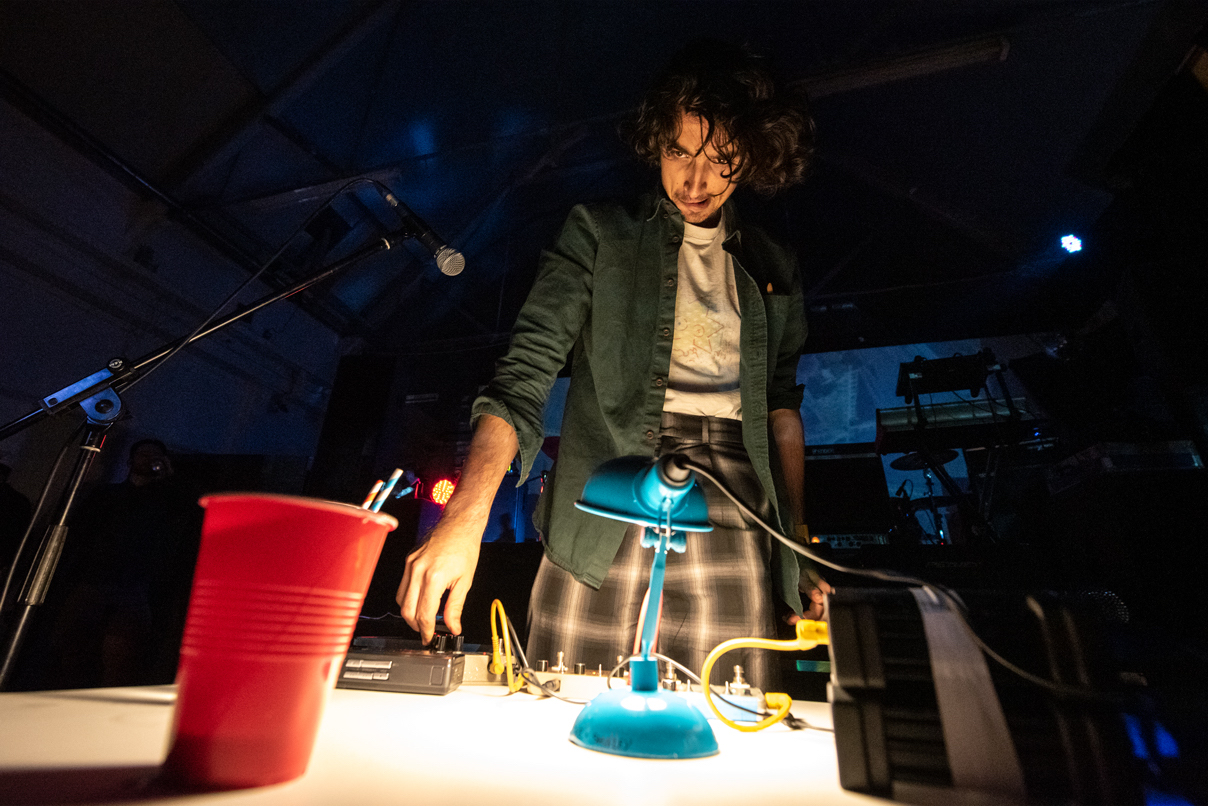 “Can it go any louder?” asks the man known only as Territorial Gobbing as he finishes setting up, “can it go as loud as possible?” The crowd stand in silent anticipation as Mr Gobbing (as I’m sure his friends call him) casually opens a bottle of wine. The cork on the last Endless Hum of the year is finally popped and we’re ready for business. It’s amazing what you can do with a table full of wires and dials, a pint of water and a Walkman. The set begins as a loud, abrasive and thoroughly filthy wall of noise: a sonic jackhammer pummelling its way into the crowd. At the same time, what may or may not be classical music plays quietly from the Walkman. Something for fans of frantic, improvisational chaos.

The pint of water and accompanying straws come into play as he raises the glass to the microphone and begins to blow bubbles. The second time he goes for a ‘bubbles solo’ it goes on and on (and on some more). The drone and noise have ceased and we’re simply watching a man ‘play’ a glass of water. Pausing briefly, he smiles and apologises before explaining that this part will go on for as long as the noise segment. The crowd is really quiet but there are pockets of awkward laughter and plenty of bemused smiles. You wouldn’t catch Merzbow doing this sort of thing. The Stewart Lee of noise, you could say. 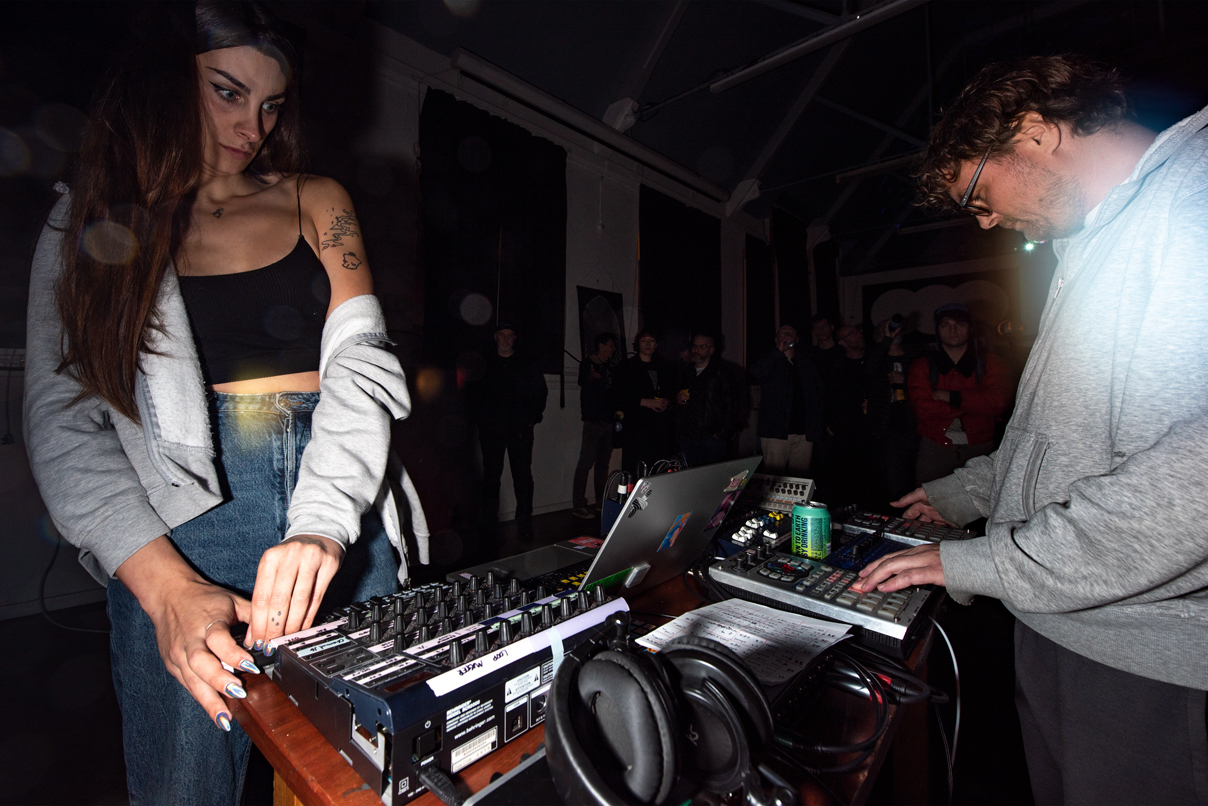 Things take a decidedly ambient turn with the arrival of D. Glare & Seraphim Blush. The duo stands around a table of electronic kit: beat makers, wires and a laptop are used to craft unexpectedly soothing sounds. Rhythmic yet relaxing, it’s a little like hearing a club night through an adjacent wall. Glitchy, sci-fi sound effects and an ambient wave that lulls us into a happily hypnotised state. Dominic Clare aka D. Glare continually taps his foot throughout, grooving to the sedate rhythm running through his mind. A rather beautiful palette cleanser and the last bit of sonic respite we’ll get tonight. 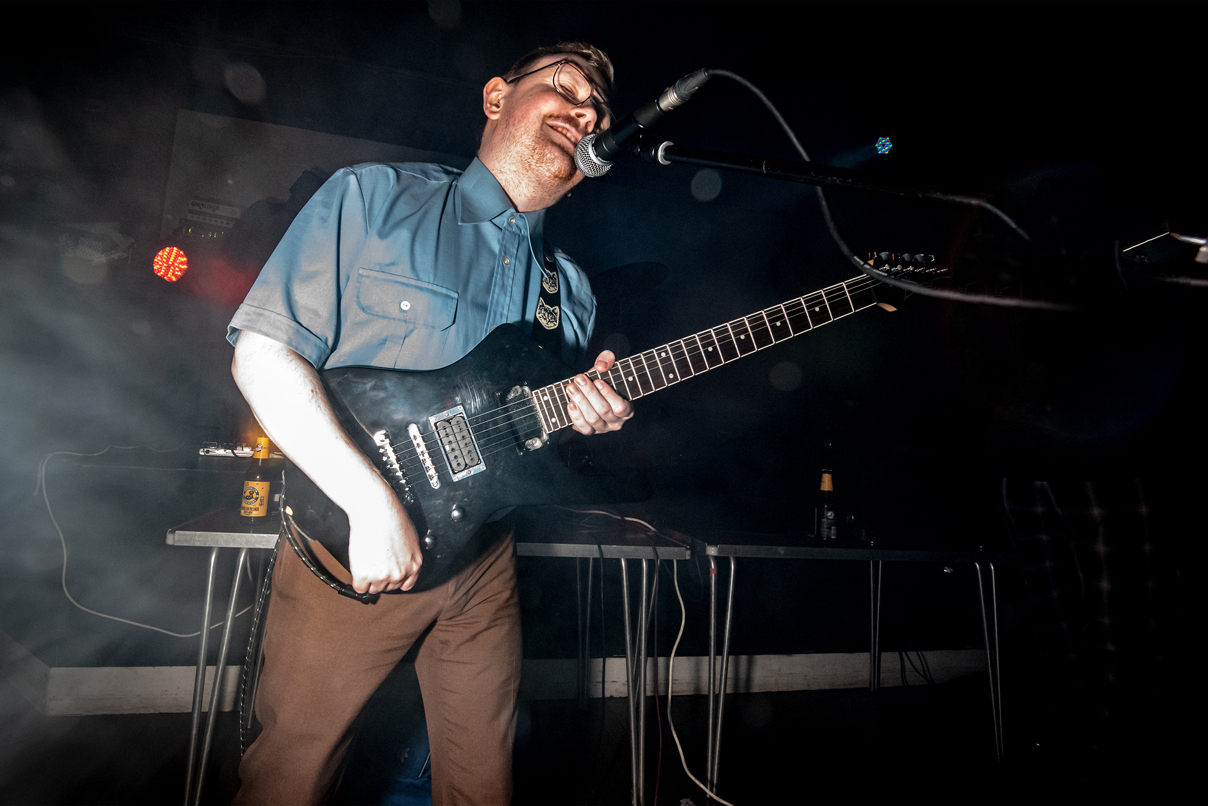 “Listen, when I woke up this morning and my mum came into my room and said it’s time to be in the rock band Thank” begins vocalist/ guitarist Freddy Vinehill-Cliffe in typically dry tones, “I said, oh no, not again”. Thankfully (no pun intended), he pushed through the doubt and brought his rather brilliant noise-rock band to The Endless Hum. Hailing from Leeds, Thank have been gathering pace since releasing their brilliantly belligerent debut album, Thoughtless Cruelty, earlier in the year. The band is utterly relentless from the start. They kick off with a punishing three-song, noise-rock medley: From Heaven steamrolls straight into Good Boy before crashing into a particularly feral take on Punching Bag. “Tonight, Matthew, I am nothing and I’m okay with that” screams Vinehill-Cliffe like the most disgruntled talent show contestant you’ve ever heard.

The drums are insane, while Monsieur Gobbing makes a return to add layers of scrambled, electronic noise over everything. The bass and guitar parts drip with satisfyingly generous levels of menace. Screaming odes to vengeful gods and the lack of good bands from London. New tracks Torture Cube and the charmingly-titled Dead Dog In A Ditch show they aren’t about to turn in a string-soaked, acoustic album any time soon. They finish us off with the heavy, headbanging glory of A Social Contract. “Just think, 30 years from now all the punks will claim to have been here at The Kirkgate Centre and formed The Fall,” Vinehill-Cliffe suggests. Future generations really will remember, remember the 5th of November. 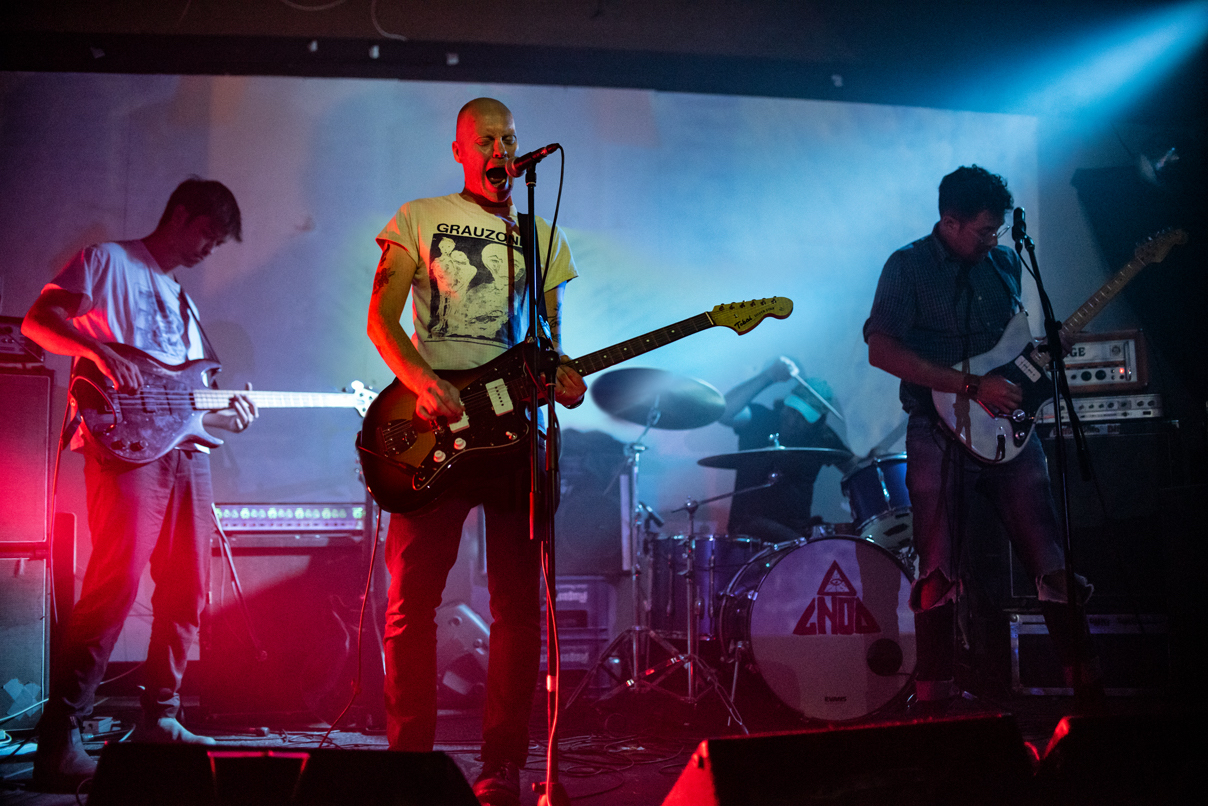 USA Nails have punk and noise-rock running through their veins. The London/Manchester-based four-piece features current and former members of Blacklisters, Silent Front and the much-missed Kong. Vocalist Steven Hodson even had a spell playing with Future Of The Left. If that doesn’t whet your appetite for destruction, I don’t know what will. The band doesn’t mess about, immediately ploughing into the industrial-strength punk of Smile. A misleading title for such a brutal song (even if it does, indeed, raise a smile). Vocals switch between Hodson and second vocalist/guitarist Gareth Thomas, both bringing their own style of throat-shredding vocals to the table. Hope they keep the Strepsils handy.

“I know we must sound like Status Quo compared to the other bands tonight,” Thomas tells the assembled crowd of noise aficionados, “but we’re pretty old”. Maybe in some alternate universe where Francis Rossi and Ian MacKaye spliced their DNA in some highly unconventional, punk rock experiment. The show comes to a halt and Thomas is left chatting to the crowd as amplifiers are lugged on and off the stage. Of course, it’ll take more than a few technical issues to stop USA Nails. When they kick back in with Revolution Worker, their disciplined sonic assault hits even harder. Heavy-duty noise-rock par excellence. 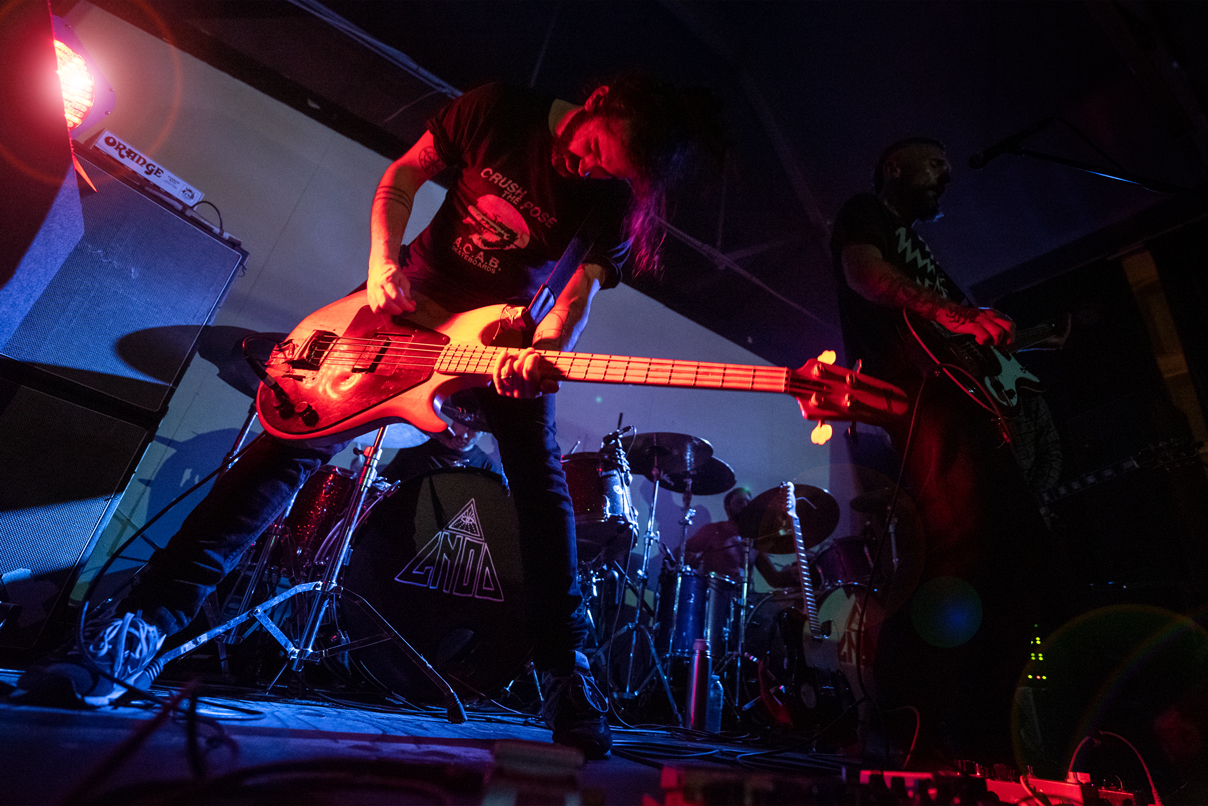 Gnod are something of an underground institution. Formed in sunny Salford, the collective knows a thing or two about noise-rock, krautrock, drone and psychedelia. They continually push their sound as far as it will go, embracing experimentation and noise in abundance. I saw one iteration of the band a few years ago (Gnod R&D) but I’m pretty sure tonight will be completely different. Plus, how could you not love a band that released an LP called, Just Say No to the Psycho Right-Wing Capitalist Fascist Industrial Death Machine?

Tonight, the ever-flexible line-up includes one bassist, two guitarists and two drummers. You won’t find any half-measures here. The first song sets the standard with a bludgeoning, doom-laden riff; a humongous slice of riff-worship and ruthless repetition. This exercise in psychedelic perseverance is a track called Spotlight from their latest album, Hexen Valley. It’s an absolute monster. Maybe it’s 10 minutes long, maybe it’s 20. It’s genuinely hard to tell as the whole room is pulled into the song’s ever-expanding vortex (you know, in a good way). The waves of noise briefly part to remind us “there’s a spotlight on you” before tumbling back into noise-ridden oblivion. Bliss. 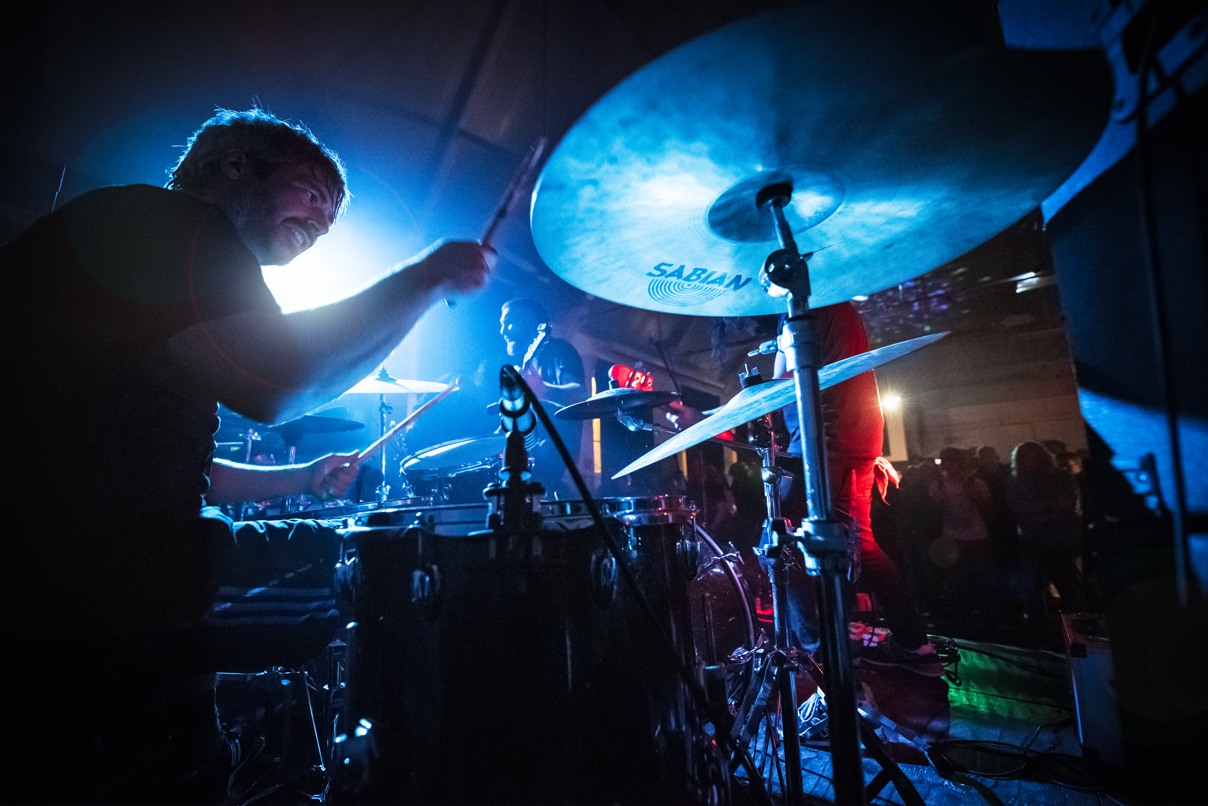 The Witness comes next, the first of two brand-new sonic excursions. The opening moments are almost restrained by comparison yet soon morph into another brilliantly hypnotic riff. Iceman soon follows, burying the vocals under a tsunami of pure sonic filth. This performance isn’t about words; it’s energy and the cathartic, strangely therapeutic power of noise. Gnod are intent on providing the most intense experience they can. Giro Day really takes advantage of the two drummers as it pummels the happy, noise-loving punters at The Endless Hum. Utterly colossal. This is some Swans-level intensity, people.

Tony’s Last Communion subsumes us in a head-splitting sea of feedback as the admirably sturdy frame of The Kirkgate Centre is shaken one last time. Even the endless has to come to an end but what an absolutely incredible experience it’s been. Let’s do it all again sometime, yeah? Long live The Endless Hum!

Find out about The Endless Hum here.

All photos by Jim Mumby | Find him on Instagram.

All words by Andy Brown. You can visit his author profile and read more of his reviews for Louder Than War here.