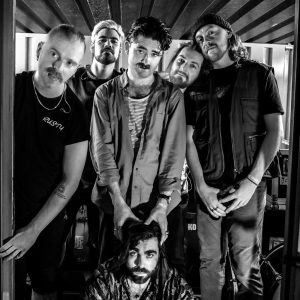 Keith Goldhanger introduces a few more new names to go with ones we already know about that are currently providing entertainment in the backrooms of bars and pubs at a reasonable cost.

October comes to an end and it’s been a busy month again.

The long and winding road that directs us towards new acts in faraway places leads some of us to Wales for a few days during October and, yet again, the wonderful city of Cardiff provided a lot of the new music that has taken over a lot of our time again. Three days and more than two dozen gigs at Sŵn Festival plus the occasional short hop on a bus midweek nearer home means there’s been little time for actually finding out too much information about a lot of this. Maybe we’ll get there eventually but just like all those bands some of us have always loved to bits from the start that still haven’t been written about………some of us get distracted on a weekly basis…… sometimes it’s nice to eat, go to bed or simply do something else.

Listen to these bands and learn you’ll want to see some of these acts live sometime – it’ll be worth it if you haven’t already come across them yet.

Thumper (top pic) were reviewed here in October, and we liked what we read and heard. This gig review at The Night and Day (and don’t forget to sign this) in Manchester reads to me as though it would have been ace with a tiny crowd. Cardiff’s show was busy of course but we imagine there’ll come a time when we’ll all be watching these whilst being tightly squashed against one other craning our necks and spilling our pints whilst the band members will have their chins pressed firmly on the ceiling.

Thumper are great. Two drummers, three or four of them singing (at times amongst the crowd), instantly likeable tunes, noisy melodies, causing controlled mayhem in whatever room they happen to be performing in and immediately it was recognised that this will be the music to trawl through at great length once it was decided when standing around at loads more gigs should come to an end. A new tune, out in early November, will surely become a favourite for those who enjoy raucous and thrilling guitars but as this page is covering October then this is as great a place to start.

Fear of Art (above) appears to be the latest Indie dancefloor banger (hopefully Indie discos do still exist) in what is already a long line of tunes this lot have released so far. Someone else can reveal their shoe sizes, names and influences but, for the time being, just play this as loud as the neighbours will allow and then spend the rest of the evening going through the rest of the band’s repertoire, subscribing to whatever the band have to subscribe to and standing alongside us when they appear down your local boozer when the next opportunity arises.

We saw Thumper about half an hour before The Umlauts whilst in Cardiff and it’s not unreasonable to suggest that Another Fact (above) may be one of the tunes of the year. A new tune and video called Frightened became available just in time for Halloween however some of us steer clear of such silly dressing-up nonsense and avoid making topical playlists at this time of year. Sit back and marvel at just how fantastic this is and take a note of this band’s name for when they too may turn up somewhere in your neighbourhood.

A band that came directly to my attention this month courtesy of your friend and mine, Big Jeff (speedy recovery mate!), are Cowboyy (note the two Y’s at the end) whose fabulous Gmaps was enough for one of us to splash out immediately for a ticket to see these supporting a band I’d not heard of before, only for the unheard of band to upgrade the gig to a support slot with a bloke who used to be in Blur and rendering the hastily purchased ticket redundant. Despite this shaky start (which isn’t the band’s fault – it’s mine for buying gig tickets too late at night), this tune is a great start and no doubt our paths will one day cross causing yet another favourite band to be added to the already lengthy list some of us keep pinned to the cork board in the kitchen alongside the constant reminder to get the right sized bin bags next time anyone is near Poundland.

Snayx are a fabulously entertaining trio from the South coast that many people may have seen already. However, if this is the case, then how come no one dragged yours truly across town to see them when the chance was available……? Well actually…. they were mentioned a year ago when our team of reporters caught them at The Scala in London supporting Kid Kapuchi (here). It clashed with something else going on for some of us of course but we caught them in Cardiff and they were ace. Their recorded output is thrilling and as exciting as the live show and of course….we’ll be seeing them again no doubt.

Mr Bruce have a tune called Where Have You Gone? which is a song about the death of this singer’s bandmate Chucks from The Correspondents. It’s as mad as anything the Correspondents have been responsible for and is as frantic and intense as one could imagine from a man who has managed to capture his grief through music without it being too soppy and sad. It has everything (Everything) one could request from a tune. It’s manic, full of twists and turns. It’s ‘not quite as ‘averagely polite’ techno as the highbrow monthly dance magazines might say and full of joy. Even though The Correspondents were seen to display the odd piece of magic (Late at night was great. Mid-afternoon – terrible), this is like all the great bits rammed into one song and sounding fabulous. It’s the best thing this guy has done for sure. One of the best dance records for so long (just don’t ask who the last one was*)

Finally, it came to our attention this month that after four decades there’s a new album out by Essential Logic. Obviously featuring the glorious sax of Lora Logic, this tune sits nicely amongst the past releases by the band as well as much of the music we surround ourselves in today. Considering these ears have not been primed for nostalgia it needs pointing out that this is ace.

There’ll be more next month of course if you’re all still keen on either keeping up or gauging how far ahead you are of the rest of us.

Here’s a playlist of tunes one of us has been listening to a lot during October 2022 and most of what’s available here you may not have to pay any more than a tenner to see if you stay tuned with the band’s activities.

Words by Keith Goldhanger. More writing by Keith on Louder Than War can be found at his author’s archive. You can also find Keith on Facebook and Twitter (@HIDEOUSWHEELINV).